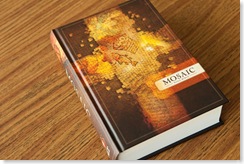 I originally considered categorizing this review of NLT Mosaic according to the "Good, the Bad, and the Ugly" cliche, but I couldn't think of anything Bad or Ugly to say. So, I'm going with something a bit weaker: what I like and what I like less.

1. The Concept. The Mosaic Bible leads off with 53 short meditations/devotional readings, one for each week of the year. The sequence follows the church year from Advent to Pentecost. Each reading is interspersed with brief quotations and artwork that sp 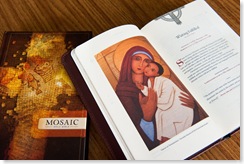 an the entirety of Christendom, both globally and chronologically. It's a mosaic piecing together little bits and pieces of traditional and contemporary Christianity. This is a great way for Christians in the United States to be introduced to the great breadth of the Church around the world. Too often our view of church is limited only to the hundred people or so we may see on any given Sunday in our own small corner of the planet. 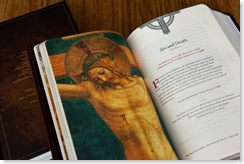 2. The Artwork. The color pictures capture well the essence of each week's topic. Biblical scenes are depicted frequently in art from Africa or Asia, and I'm reminded that it was more than just Flemish painters in the Renaissance who read their world back into their biblical scenes. The art is also an effective reminder of media translation. Think about it. We've transferred the biblical text from the original languages into native tongues around the world, carrying a foreign ancient text into a new culture. Is it any different to translate the world of the Bible into visual images that are meaningful in that same culture? 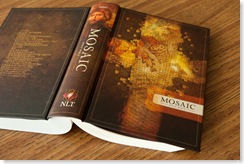 3. The Book. The book itself is an attractive hardcover. It appears to be sturdy and durable, but I'm too gentle with my Bibles to ever have one fall apart anyway. The binding is glued and the paper is noticeably different between the meditations and the Bible itself.

Since this is really a devotional Bible, I don't have anything to critique content-wise. The meditations that I've read are meaningful and thought-provoking. My only criticism is that by picking and choosing bits and pieces from various lectionaries they've created a set of readings that doesn't actually align with any denomination's regular reading cycle. I'm not even sure this is necessary or important since the goal was to share segments from the breadth of Christianity. 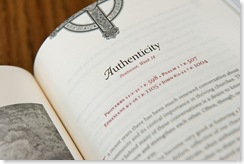 The Mosaic Bible is still effective in raising awareness that a church calendar exists and that some denominations structure their year around these seasons. The audience for this Bible appears to be evangelicals anyway who are often blissfully unaware of what is going on in most mainline denominations. (I know I'm always surprised when the fish sandwich returns to prominence at McDonalds every year, strangely corresponding to Ash Wednesday. This Bible may not help you with that culture shock per se.)

If you're looking for a new Bible to read through in 2010, I recommend the NLT Mosaic. The translation is fresh and clear and the weekly devotions will expose you to a whole wide world of Christian thought and art that you never knew existed.

The Fine Print:
In accord with FTC guidelines regarding endorsements, it is my duty to disclose that I received a complimentary copy of the Holy Bible Mosaic from Sean Harrison at Tyndale House Publishers in exchange for this review. The FTC apparently considers this a paid endorsement and treats the review copy as compensation. Their guidelines require that any such material connection between the reviewer and the publisher be disclosed. However, unlike paid endorsements, there is no agreement, express or implied, between me and the publisher requiring a positive, glowing endorsement.