Anyone interested in the ongoing tension between faith and reason in what passes for biblical studies today will want to read Ron Hendel’s piece in BAR titled “Farewell to SBL.”

I fully agree with Hendel that SBL should be focused on critical investigation of the Bible, free of overt religious proselytizing and theologically-motivated biblical interpretation.


Instead of reason, “faith in the God of Abraham, Isaac, and Jacob”—as interpreted by evangelical scholars—should be the rule in Biblical scholarship. Waltke dismisses critical inquiry as an annoying nuisance, like the scratchy sound of an old LP. This is in the midst of a review of a brilliant scholarly commentary on the Book of Proverbs, written by a Jewish scholar, in the Anchor Yale Bible series.

On the one hand, I give Waltke the respect he has earned as a scholar, and I am happy to listen to his views. But when he says such rationally absurd things as “the factual data validates Solomon’s authorship of Prov[erbs] 1:1–24:33” (which belongs to a post-Solomonic stratum of Hebrew, as Waltke ought to know), and when he asserts that Moses wrote the laws of Deuteronomy (which are written in post-Mosaic Hebrew), we are clearly not in the world of critical Biblical scholarship at all. This is religious dogma, plain and simple.

I was equally incredulous reading Waltke’s assertion that Solomonic authorship of Proverbs was “factual.” (See the discussion here on that review and Waltke’s position.) Hendel continues, pointing out why this growing trend for the SBL to accept non-critical Bible scholarship is leading closer to full validation of their non-critical and dogmatic views.


Why is this a problem? Certainly Waltke is entitled to his views. The problem is that the SBL has loosened its own definition of Biblical scholarship, such that partisan attacks of this type are now entirely valid. When I learned of the new move to include fundamentalist groups within the SBL, I wrote to the director and cited the mission statement in the SBL’s official history: “The object of the Society is to stimulate the critical investigation of the classical biblical literatures.”3 The director informed me that in 2004 the SBL revised its mission statement and removed the phrase “critical investigation” from its official standards. Now the mission statement is simply to “foster biblical scholarship.” So critical inquiry—that is to say, reason—has been deliberately deleted as a criterion for the SBL. The views of creationists, snake-handlers and faith-healers now count among the kinds of Biblical scholarship that the society seeks to foster.

This trend in the SBL likely explains the odd reviews that Alan Lenzi pointed out on his now-gone blog this past spring – confessional, dogmatic, non-critical reviews published by RBL (like Waltke’s, for example).

For my part, I had found secular biblical studies and the forum provided by SBL to be an intellectually stimulating middle ground where those of us of all faiths (including no faith) could discuss the Bible from a critical, academic point of view, free from dogma and religious divisions. I was surprised, then, to find scholars blurring the line between confessional faith and factual argument even last year at the annual meeting.
What’s to be done? We can’t all just let our memberships lapse and leave the society, can we?
Posted by Douglas Mangum at 6:04 PM 5 comments:

Beyond the Qumran Community 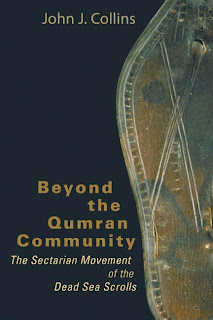 John J. Collins
Beyond the Qumran Community: The Sectarian Movement of the Dead Sea Scrolls.
Wm. B. Eerdmans, 2010

A few months ago, I was convinced that the Essenes had no clear connection to the Dead Sea Scrolls and that the site of Qumran was most likely not a religious sectarian settlement. (Background here.) Now I’m not totally recanting my earlier skepticism, but after reading John Collins’s latest book, I’ve realized my hard-line denial of the possibility was clouding my objectivity and hindering my understanding of consensus arguments. Yes, many of the consensus positions require a speculative leap at some point to bring evidence and theory together, but the connections are not as completely implausible as I’d thought. Since I value going where the evidence leads more than defending a particular point of view, I have to admit that Collins has done a fine job in presenting the most nuanced and balanced account of the Qumran sect that I have ever read.

The material is organized in 5 chapters:

1. The New Covenant. The community described in the Damascus Document (CD) is discussed in depth. The laws and the distinctive elements about sectarian life are compared with evidence from other sectarian documents like 4QMMT and other Jewish literature from the period such as Enoch and Jubilees.

2. The Yaḥad. The sectarian community described in the Community Rule (1QS) is compared with that in the Damascus Document. The surprising conclusion (that seems obvious once it has been presented) is that they do NOT describe the same group. This is important because most scholarship on the DSS sect takes all sectarian texts together as describing a single sect that dwelled at Qumran.

3. The Historical Context. Here Collins reviews the evidence for the historical setting of the sectarian movement. Consensus had previously placed the origins of the sect in the early 2nd century BCE (i.e., Jonathan Maccabee was the Wicked Priest). I have long found the arguments for a 1st century BCE setting compelling especially as laid out by M.O. Wise (“Dating the Teacher of Righteousness and the Floruit of His Movement,” JBL 122 (2003):53-87). Collins points out how the pillars that had supported a 2nd century dating have eroded as a result of recent research.

4. The Essenes. Much scholarship on Qumran and the sect described in the DSS ignores or minimizes the contributions from scholars such as N. Golb. The fact that Collins will at least mention Golb and cite him when appropriate is surely a sign of his respect for hearing all sides in the debate. The Essene hypothesis identifying the sect described in the scrolls with the Essenes described by Josephus and other ancient writers has been one of the most controversial issues in DSS scholarship. Collins treats all sides fairly and accurately represents the strengths and weaknesses of each argument. His chapter lays out the problem and the possible solutions clearly without overtly favoring one side until all the options and evidence have been discussed. It is typical of Collins in this book to avoid coloring the reader’s perceptions of the issue by giving away his preferred interpretation up front.

5. The Site of Qumran. In this final chapter, Collins discusses the archaeology of Qumran and the possible connection between the site and the scrolls. He gives a full account of the major interpretations of the site and concludes that at least in the final period of settlement before the First Revolt in 66-68 CE, the site likely housed a sectarian settlement. However, he believes the group at Qumran was small and one of many settlements of the sect described in the scrolls. This theory explains the data much better than claiming a single large sect lived at or near Qumran and composed all the scrolls. It allows for many of the scrolls to be brought from elsewhere during the upheaval of the First Revolt. It also explains the multiplicity of sectarian documents such as different copies of the Community Rule that differ slightly. Other theories such as Golb’s idea that the collection of scrolls came from a Jerusalem Temple archive hidden in the area have trouble with the fact that the library lacks the diversity often attributed to Second Temple Judaism. Where are the Sadducean texts if this was a temple archive? Where are the scrolls written by the Pharisees?  The theory that these scrolls were brought together by members of one larger group makes better sense. It explains the fact that most of the sectarian literature has an overarching unity (i.e., calendrical and purity issues) that fits with the larger parent group and a diversity (i.e., celibate or married) that can be explained by the subgroups.

I am still not convinced that the scrolls found in 11 caves near the Dead Sea are necessarily connected to anyone who inhabited Qumran or to the Essenes. However, Collins has convinced me that the consensus is not totally implausible. The straightforward way that he engages and deconstructs consensus and non-consensus scholars alike shows me that he is more concerned with giving an honest interpretation of the evidence than defending any theory in particular. His careful method of debunking mistaken assumptions and conclusions on all sides is a quality I admire, not least because I felt that I would have approached the problem in much the same way.

The book is well worth reading and quite affordable at $25 paperback. If/when I teach an introductory class on the Dead Sea Scrolls, this will be required reading. The bibliography is substantial and Collins’s familiarity with the immense secondary literature on the DSS is a model of good scholarship.

To close, as required in book review posts now, I must disclose that I have NO material connection to the publisher. Yes, that’s right. I did not receive a free review copy for saying nice things about the book. I actually bought this book for myself and found his treatment of the issues so compelling that I was compelled to recommend the book to all of you.
Posted by Douglas Mangum at 10:04 PM 2 comments: