Bringing the Dead Sea Scrolls to Life in MN

My first Hebrew professor and undergraduate mentor, Michael Wise, is profiled in the current issue of Northwestern College's Pilot. 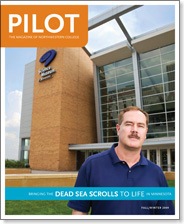 You might expect to find the preeminent scholar on the Dead Sea Scrolls cloistered in the sunless basement of a museum, surrounded by ancient artifacts and sheaves of dusty papers.

But on a warm afternoon in early September, Michael Wise, Ph.D., internationally celebrated for his knowledge in ancient languages, history and the scrolls, is in his well-lit office at Northwestern College.
The scholar-in-residence and professor of Hebrew Bible & ancient languages jumps up amiably to meet with a student seeking advisory help. Wise, the highly regarded author of The Dead Sea Scrolls: A New Translation, has published innumerable scholarly papers, presented professional papers and lectures and has been featured in Time, The New York Times and the Chicago Tribune. But he is relaxed and at home in his third-floor office in Nazareth Hall.

A self-professed “language guy,” Wise reads Greek, Hebrew, Aramaic, Latin, Syriac, Middle Egyptian, Coptic, Arabic and Akkadian (an extinct language spoken in ancient Mesopotamia). For him, learning the intricacies of ancient languages is as addictive as "eating peanuts." His
achievements put him into an elite group of academics, both secular and religious.

"There aren’t too many of us," he admitted. 'We talk about languages with a certain glee." [read the rest here]


The most exciting news I learned from this issue is that there will be an exhibit of the Dead Sea Scrolls in St. Paul this spring.


The Science Museum of Minnesota plans to exhibit three sets of five of the actual scrolls discovered in caves along the shore of the Dead Sea between 1947 and 1956. This collection of important writings includes biblical manuscripts, commentary and rules for community life and details of religious rituals. Fragments of the earliest known texts of the Old Testament, dating back 2,000 years, will be displayed. The exhibit opens March 12, 2010.


I expect that the MN exhibit with Wise's involvement will reflect the broad spectrum of scholarship on the DSS more than the exhibit I saw in San Diego, for example.

For those of us in central WI, the exhibit opening Jan. 22, 2010 at the Milwaukee Public Museum is a little closer to home. For my part, I'll be trying to get to both so I can criticize them online anonymously  . . . (sorry, inside joke. well, not really a joke, a tragically sad and bizarre story).