The passing of May 21, 2011 without a world cataclysm brings to light the number one reason you should avoid prophesying at all costs.

There's no margin for error and the biblical consequences are severe. Just read Deuteronomy 18.

Deuteronomy 18:20–22 (ESV)
20 But the prophet who presumes to speak a word in my name that I have not commanded him to speak, or who speaks in the name of other gods, that same prophet shall die.’ 21 And if you say in your heart, ‘How may we know the word that the Lord has not spoken?’— 22 when a prophet speaks in the name of the Lord, if the word does not come to pass or come true, that is a word that the Lord has not spoken; the prophet has spoken it presumptuously. You need not be afraid of him.   (emphasis added)


How do you know if a prophet is really from God?

But what if he prophesies and it doesn't come to pass?

You have two options:
1) Kill the false prophet or 2) Subtly rework the prophecy so that it is now looking ahead to another time in the future. The problem with option 2 in this case is that there was a specific date set which was missed and then another date set which again passed without incident.

Will this be the next Great Disappointment? 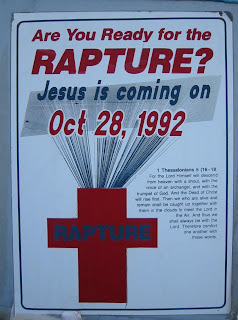 Stop setting dates for the rapture!
Posted by Douglas Mangum at 6:34 AM No comments:

The End is Near

In case of rapture, this blog will be unmanned. 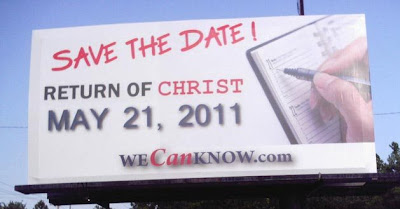 It never ceases to amaze me that despite all the failed predictions of the past, people somehow still think their calculation will be the right one. I would think the warning of Matthew 24:36 would be enough to convince them that WE CAN'T KNOW.

Fortunately, James McGrath saved me the time of rounding up all the buzz on this craziness. I especially recommend this post by Rachel Held Evans who points out the connections with the most famous failed forerunner of Harold Camping and manages to give some spiritual food for thought along the way.
Posted by Douglas Mangum at 8:08 PM No comments:

I have not been a fan of the NIV ever since I was able to understand the complexities of translation philosophy. In my opinion, it was more popular due to its marketing strategy than for its merit as a translation. (My opinions on the NIV can be found mixed among my posts on bible translation.) I'm sure Zondervan has high hopes that NIV 2011 will help them retain market share and win over the crowd that largely panned TNIV due to the gender translation issue. While initial reports suggested NIV 2011 was more restrained on that issue, I don't think they went far enough to fix the problems with TNIV (as noted here). My litmus test remains their translation of Isaiah 19:16. TNIV and NIV 2011 gut the original of its intentionally insulting rhetoric. I won't translate the verse here lest I offend you.

I have ignored most of the recent advertising push to promote the NIV 2011, but a full back cover ad on a Christian magazine caught my eye. Here's the text from the ad. Is it just marketing spin or a misleading misrepresentation of the facts?

It's amazing how going back to the beginning moves us so far forward. Translated from the most reliable ancient biblical manuscripts. Tirelessly researched by the world's preeminent biblical scholars and linguists. And made crystal clear for English-speaking audiences worldwide. The New International Version is the translation that's easy to understand, yet rich with the detail found in the original Scripture.

Let's look at these claims and their implications.

2. "Tirelessly researched by the world's preeminent biblical scholars and linguists." Other Bible translation committees don't have the "preeminent" scholars (only the eminent ones), so NIV must be better. And they worked "tirelessly" this time. Actually, in these past two decades of expanding English Bible versions, many scholars have been involved in the production of multiple versions. Some of the same people working with a different translation philosophy. But at least when working on the NIV, they didn't get tired.

3. "And made crystal clear for English-speaking audiences worldwide." This is a value judgment. Crystal clear relative to what? Young's Literal Translation? The New American Standard? The King James? What is made clear? The meaning of the "original"? The English style?

I realize that some people will honestly agree with the opinions about the NIV found in this ad. Only the last claim is, in my opinion, stretching the truth. Our Bible translation preferences have been conditioned from years of using a particular favorite. For a long time, the NIV has been that favorite for a lot of people. An ad like this is designed to get people to stick with the NIV, hopefully without thinking too much about it. 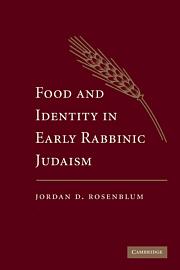 I was waiting with bated breath for my friend Jordan Rosenblum's book to be published by Cambridge, but then it was, and I forgot til now to mention it.


Now a very informative review of the book Food and Identity in Early Rabbinic Judaism has been posted on H-Judaic, so you can learn more about the book before deciding if you want to spend 50 pounds on it (that's UK currency - I don't think the book will help you lose weight). From the review:


Following decades of excitement over new social scientific methodologies in the study of religion, more recent scholars have asked why the new insights offered by these models so often appear inadequate. Jordan Rosenblum provides one answer by actively embracing anthropological innovations in the study of early rabbinic food practices, while simultaneously insisting on a different data set. He observes that previous treatments have elided biblical law and Jewish identity, overlooking the great changes that rabbinic texts made to the food (and other) practices that have shaped later Judaisms. Asserting the necessity of his own investigation of food and identity in early Judaism, he demonstrates that crucial, anthropological approaches have not been adequate for the consideration of rabbinic sources because the questions most frequently posed have not engaged available evidence. In reply to famous early explorations of Roland Barthes, Mary Douglas, and more recently Marvin Harris, Rosenblum argues that “the absolute origins of the prohibitions against pork, for example, are irrelevant. What matters for the Tannaim is that God instituted the ban in the Hebrew Bible. How they interpret, understand, and enact this regulation is verifiable” (p. 9). He promises a book that presents the appropriate data set, as well as the best tools and models for considering how the preparation and ingestion of food constructs identity.

If you read the rest of Susan Marks' review, you will indeed want to read the book. And I'm not just saying that because Rosenblum taught me to read rabbinic Hebrew.
Posted by Douglas Mangum at 3:42 PM No comments: