Just in time for Father's Day (hint), Eisenbrauns has released a new book on the grammar of Babylonian Aramaic. I really should be reading more Aramaic (as should all of you), so don't miss this one! 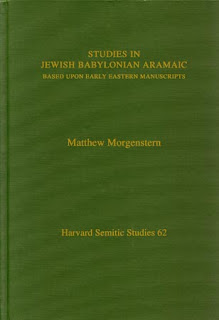 This book is the first wide-ranging study of the grammar of the Babylonian Aramaic used in the Talmud and post-Talmudic Babylonian literature (henceforth: Rabbinic Babylonian Aramaic) to be published in English in a century. The book takes as its starting point the long-recognized problem of the corrupt nature of the later textual witnesses of Babylonian Rabbinic literature and seeks both to establish criteria for the identification of accurate textual witnesses and describe the grammar of Rabbinic Babylonian Aramaic. The book is both programmatic and descriptive: it lays the foundations for future research into the dialect while clarifying numerous points of grammar, many of which have not been discussed systematically in the available scholarly literature.