Way back in July I posted about Amazon's Kindle device.  My main complaint back then about having a digital library for Kindle was that most of what I read is not available in Kindle format.  I also wondered why there weren't more available what with all the digital versions of biblical studies resources created for Bibleworks and Logos.

I have since discovered that more of the books I'm interested in reading have appeared in Kindle format over the last several months.  Back in July, I think I found 3 or 4.  The prices have also dropped.  David Carr's book was $28 in July but it's $19.25 now.

Here's a list of what I've found for biblical studies (especially Hebrew Bible, Judaism, and religious studies) now available for Kindle (listed alphabetically).  The asterisk * indicates its on one of our reading lists at UW-Madison.

Robert Alter - The Book of Psalms

David Carr - Writing on the Tablet of the Heart

Brevard Childs - Introduction to the Old Testament as Scripture

*William Dever - Who Were the Early Israelites and Where did They Come From?

William Dever - Did God Have a Wife?

*William Dever - What Did the Biblical Writers Know and When Did They Know It?

Hanan Eshel - The Dead Sea Scrolls and the Hasmonean State

Craig Evans and Emanuel Tov - Exploring the Origins of the Bible

*Barry Holtz - Back to the Sources

Jodi Magness - The Archaeology of Qumran and the Dead Sea Scrolls

Roland Murphy - The Tree of Life

George Nickelsburg - Jewish Literature Between the Bible and the Mishnah

Peter Schaefer - Jesus in the Talmud

Benjamin Wright, ed. - A New English Translation of the Septuagint

There are even more if your interests run more towards NT or theology or Christian history materials.  I think it's quite an impressive increase for the last 7 months.

Now these books require purchase, but you can get the whole text of the Bible for free in the English Standard Version.  That alone makes it worth it, right?

Eisenbrauns Valentine Contest: And the Winner is . . .

Jim Getz of biblioblogging fame for his illustrious work at Ketuvim has taken first place in Eisenbrauns 2009 Valentine's Day Contest for his "Unpublished Poetic Tablet from Ugarit."

I was a bit slow to getting around to checking the winners list. So this might be old news to some of you.

Congratulations, Jim!
Posted by Douglas Mangum at 11:07 AM 2 comments:

Wellhausen wasn't that bad of a guy

James McGrath has reported on his exciting weekend at the Midwest SBL Meeting in Illinois. I would've liked to catch the session on teaching the Bible. He writes:

A nice moment was when one member shared the experience of reading Julius Wellhausen's Prolegomena to the History of Israel, and how clear it was when reading that book that Wellhausen's source critical approach was an attempt to make sense of the text, not impose a pre-defined framework upon it. Critical reading of the Bible is nothing other than an attempt to take the Bible seriously, all of it in all its details and with all its difficulties. Pretending that the Bible doesn't have these features is, by way of contrast, an act of infidelity to Scripture.

Wellhausen often gets a bad rap, usually from people who haven't read him or at least haven't read him charitably. One reason ad hominem is so effective is that we tend to see things as worse than they are when we already "know" that someone else was wrong and have a bad impression of that person.
Posted by Douglas Mangum at 6:40 AM 5 comments:

The Importance of the Septuagint for Biblical Studies

We use the Septuagint all the time in our study of the Hebrew Bible, comparing the reading with our Hebrew text (BHS) and trying to explain the differences.  It's proven to be a valuable exercise and required me to use my Greek much more than I'd anticipated.  After all, I went in to Hebrew Bible and not New Testament primarily because I liked studying Hebrew better than I liked studying Greek.  That and a good understanding of the Hebrew Bible and Second Temple Judaism is essential to being a good NT person anyway.

Therefore, I was pleased to see Tyler Williams has posted his "Reasons to Study the Septuagint."  I recommend it for all of you thinking of going in to Hebrew Bible to get away from Greek.  It won't work and Tyler will tell you why.

HT:  John Hobbins
Posted by Douglas Mangum at 6:22 AM 1 comment:

The recently retired NT Wrong has stepped in to produce the past-due Biblical Studies Carnival XXXVII, highlighting posts from December 2008.

Between the two of them, there's a lot of reading to do, so get to it!
Posted by Douglas Mangum at 6:53 PM No comments:

If you often find yourself lost for words at just the moment when you need a really good comeback, spend some time with the Biblical Curse Generator.

You'll be pronouncing doom and gloom and cursing like a biblical prophet in no time.

via Jack Sasson / Agade
Posted by Douglas Mangum at 11:14 AM 1 comment:

"amount of bonuses that archaeologists get"

If you put that phrase in Google, one of my posts will be the second hit because I used archaeology and bonus in the title.

The question is why was someone searching for that phrase and, by doing so, stumbling upon my blog yesterday?

I'm not an archaeologist, but from what I've been told they aren't really in it for the money . . . because the only way to get "bonuses" is to sensationalize your find, turn it into a best selling book, make movies about it, etc.

By then, you're considered a sell-out and not a real archaeologist and scholar anymore anyway.

I just briefly thought of a few examples of archaeologists who have "sold out" by turning tenuous interpretations into popular books, but I've decided it would be more prudent to not name them.

So, if you were considering a career in archaeology because you thought they got a lot of bonuses and were well-compensated for their time and effort, sorry to disappoint.  Go to law school instead.
Posted by Douglas Mangum at 8:44 AM No comments: 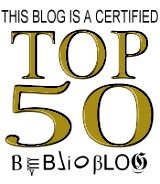 I've finally cracked the Top 50 in N.T. Wrong's January ranking of biblioblogs. Yay for me coming in at #41. I couldn't be more proud.
Posted by Douglas Mangum at 1:46 PM 6 comments: