Here's a video from Christmas a few years ago when my middle daughter was almost 3. Enjoy her energetic recitation of Luke 2:8-20.

Posted by Douglas Mangum at 12:56 PM No comments:

Sherlock Holmes and Working with No Data

I came across this great quote from Sherlock Holmes (via Arthur Conan Doyle, The Adventures of Sherlock Holmes, "A Scandal in Bohemia") that aptly describes the dangers of speculating, theorizing, and developing conclusions before we have enough data to base them on. Holmes has received an unusual letter and shared it with Dr. Watson. Here is their exchange:


"This is indeed a mystery," I remarked. "What do you imagine that it means?"

"I have no data yet. It is a capital mistake to theorize before one has data. Insensibly one begins to twist facts to suit theories, instead of theories to suit facts...."


Ever read a scholarly argument passionately demonstrating how the data are not, in fact, in conflict with the theory, despite appearances? 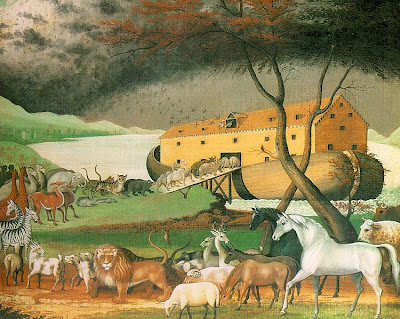 Exciting news from Cincinnati! If you haven't yet had the chance to visit the Creation Museum, you will soon have no excuse because you simply will not be able to resist the lure of seeing a replica of Noah's Ark at full biblical proportions!!


The Creation Museum will announce details Wednesday afternoon of its planned expansion.

Answers In Genesis, which built and operates the religious-themed attraction, plans to build a full-scale wooden replica of Noah's Ark based on biblical descriptions.

The $24.5 million project will be constructed by the same team that built the Creation Museum.

The religious ministry is soliciting online donations to help construct the project, which they expect to draw an estimated 1.6 million visitors per year.

Ken Ham, president and CEO of Answers In Genesis, cites poll data showing that an estimated 63 percent of Americans would visit a full-scale replica of Noah's Ark if one were built in the U.S.

As soon as it's built, I'm planning my trip to Cincinnati! Of course, I'm not quite sure what the Ark has to do with a "Creation Museum" but I guess it is a story from Genesis. Maybe next they can build a replica of the Tower of Babel.

DISCLAIMER: Lest you think I'm serious, this post will help you detect the appropriate filter through which to understand my comments.

HT: Agade
Posted by Douglas Mangum at 8:55 AM 2 comments: