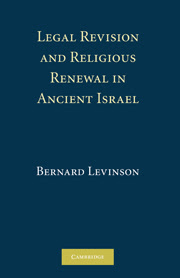 Nearly a week ago now, I had the opportunity to attend an SBL session devoted to the discussion of Bernard Levinson's book Legal Revision and Religious Renewal in Ancient Israel (reviewed on this blog here).

The panelists included David Wright, Christophe Nihan, and Beth Berkowitz with a response by Levinson himself. Wright and Nihan offered more traditional, straightforward reviews of the book with an overview of the content and some discussion of its strengths and weaknesses. Their reviews were generally positive - so much so that their minor criticisms and disagreements were not particularly memorable. Most disagreement seemed to stem from fundamental differences in perspective regarding the relationship between ancient Near Eastern texts, their authors, and their audiences.

The presentation by Beth Berkowitz was more creative and less traditional as a review. She demonstrated, convincingly in my opinion, how the later rabbinic exegetes further transformed the biblical text with similar goals of religious renewal, but she raised an important issue regarding whether the mode of textual transformation itself would not have also been transformed over time. I enjoyed her presentation the most as it gave me a chance to practice my rabbinic Hebrew (a Mischsprache par excellence, if there ever was one), and it reminded me of something that had jumped out at me on first reading Levinson's book. I find it completely plausible that the mode of textual transformation would have remained very similar over time. The same processes that worked to transform the Hebrew Bible in the Second Temple period and late antiquity in the Dead Sea Scrolls, the New Testament, and rabbinic literature were also at work among the tradents who transmitted the biblical text and shaped its canonical form. Even today, interpretation of sacred Scripture is a vital part of religious life; it is the essential work of making an ancient, out-of-date text relevant for contemporary life. The mode has not substantially changed, but the decisions on what is and is not Scripture have been made - differently by different groups all over the world.

Overall, the reaction to Levinson's book was positive and responses were generous in recognizing the important contribution he has made. The discussion time at the end, however, seemed dominated by some who seemed to have a fundamental misunderstanding of the central tenet of this book. This point could have been made more explicity--earlier texts were preserved because they had a measure of canonical authority. Later texts had to be subtly subversive to recast the reader's understanding of the earlier texts because they couldn't just make the earlier texts go away. I think Levinson's book demonstrates perfectly how that process was at work in the Hebrew Bible. Anyone involved in a living religious community will be able to see that the process is still at work today.