The Invention of Hebrew

At SBL a few days ago, I was introduced to a very intriguing new book examining why anyone ever decided to write in Hebrew anyway. I look forward to hopefully getting a review copy, Seth! 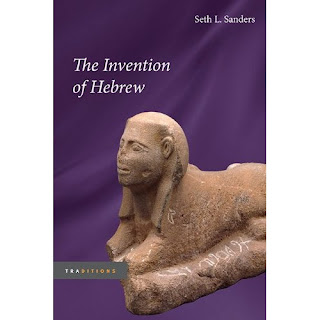 From the press release by the University of Illinois Press (via Agade):

How choosing a language created a people

The Invention of Hebrew is the first book to approach the Bible in light of recent epigraphic discoveries on the extreme antiquity of the alphabet and its use as a deliberate and meaningful choice. Hebrew was more than just a way of transmitting information; it was a vehicle of political symbolism and self-representation.

Seth L. Sanders connects the Bible's distinctive linguistic form--writing down a local spoken language--to a cultural desire to speak directly to people, summoning them to join a new community that the text itself helped call into being. Addressing the people of Israel through a vernacular literature, Hebrew texts reimagined their audience as a public. By comparing Biblical documents with related ancient texts in Hebrew, Ugaritic, and Babylonian, this book shows Hebrew's distinctiveness as a self-conscious political language. Illuminating the enduring stakes of Biblical writing, Sanders demonstrates how Hebrew assumed and promoted a source of power previously unknown in written literature: "the people" as the protagonist of religion and politics.

"An absolutely innovative way of reading the use of ancient Hebrew for generating political identity and for understanding the Hebrew Bible itself. It is refreshing to see such profound insight and analyses come out of material that has otherwise not
received substantial recognition of its cultural and political importance."--Mark S. Smith, author of God in Translation: Deities in Cross-Cultural Discourse in the Biblical World

"Sanders takes familiar, long-studied material and makes new knowledge. He treats biblical Hebrew as a political phenomenon, exploring how language and especially its written form were employed in the creation of an imagined community--a
nation--in the course of ancient Israel's history."--Eva von Dassow, author
of State and Society in the Late Bronze Age: Alalah under the Mittani Empire

Seth L. Sanders is an assistant professor of religion at Trinity College and the editor of the Journal of Ancient Near Eastern Religions.

Posted by Douglas Mangum at 7:23 AM