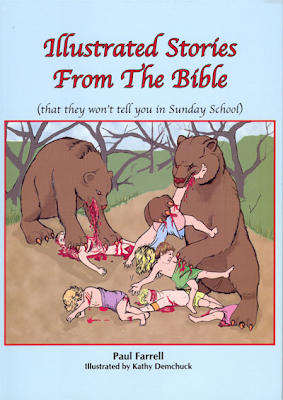 23 He [Elisha] went up from there to Bethel, and while he was going up on the way, some small boys came out of the city and jeered at him, saying, "Go up, you baldhead! Go up, you baldhead!" 24 And he turned around, and when he saw them, he cursed them in the name of the LORD. And two she-bears came out of the woods and tore forty-two of the boys.

It is a personal favorite of my good friend Tod who also happens to be blessed with baldness. I've given more thought to the story today after reading David Ker's post and James McGrath's humorous follow-up. David challenged his readers to explain what they would say if they had to teach or preach this passage in church. James responded by giving several unique angles on the text that one could use to bring some relevance and application out of it.

I appreciate David's approach, but I disagree with some of his conclusions. By situating the success or failure of Elisha's mission as a prophet within the larger framework of Israel's failure to keep the covenant, he effectively neutralizes Elisha as a biblical "hero."

Ethnic hatred. Religious conflict. Revenge culture. Supposing for a moment that this story is historical, I think the narrator is the key figure. First, as I mentioned before, he is establishing Elisha as the inheritor of Elijah’s power as a prophet. Second, he interprets the attack of the bears as a sign of God’s judgment. But in the wider context of the book it’s clear to us that the author is showing that there are no heroes on either side. If there were, Elisha’s efforts would result in the nation’s repentance and victory over its enemies. Such is not the case. Israel’s breaking of the covenant results in dispersion and destruction and the end of the national hopes of a king like David to rule forever in Jerusalem. [emphasis added]

I don't follow this reasoning. If Elisha were the hero, then Elisha's efforts to bring repentance would have succeeded? Yes, 2 Kings 2 is establishing Elisha's credibility as a prophet, but I don't think the author is showing "there are no heroes on either side." The Deuteronomistic History is fairly consistent in holding to the existence of a remnant that remains righteous and committed to Yahweh despite what the rest of the Israelites are doing. I also disagree with David's suggestion that the correlation between the bear attack and Elisha's curse was mere coincidence.

In the petty squabbles of minor kingdoms, God doesn’t take sides. The correlation of Elisha’s curse and the youth’s misfortune is purely coincidental. This is a huge point to get our heads around. He doesn’t care which football team wins. He wasn’t making a statement with 9/11 or the 2004 tsunami in Indonesia. Although the narrator of this story sees a correlation between the events, God doesn’t. Again, back to the wider context of the book, God’s people have broken their covenant with him and are reaping the consequences.

The appeal to coincidence feels too much like an attempt to find a rational explanation for a bizarre turn of events. In the world of the narrator, words had power - real power, almost magical power. They believed curses were effective. All we have to observe is the text, and the immediate context is filled with displays of Elisha's supernatural power. The perspective of the text on this last event is the same - God listens to Elisha and acts on his behalf, even if his motives seem a bit self-serving. I liked the perspective of the NET Bible here in their notes on 2 Kings 2:24-25.

A curse was a formal appeal to a higher authority (here the Lord) to vindicate one's cause through judgment. As in chapter one, this account makes it clear that disrespect for the Lord's designated spokesmen can be deadly, for it is ultimately rejection of the Lord's authority.

The two brief episodes recorded in vv. 19-25 demonstrate Elisha’s authority and prove that he is the legitimate prophetic heir of Elijah. He has the capacity to bring life and blessing to those who recognize his authority, or death and judgment to those who reject him.

Rejecting or mocking the LORD's anointed (Elisha) was the same as rejecting or mocking Yahweh himself. That is the take-home point that I would use for a Sunday School class. Still, it is a bizarre story. I recommend you head over to read James McGrath's 11 different angles on this text. Here's my favorite.

The fill in the gaps approach: Elisha not only cursed the youth but smeared them with honey, knowing that there were bears in those woods. He later repented of having done such a horrible thing. He had been having a really bad day.