Reflections on The Bible Unearthed 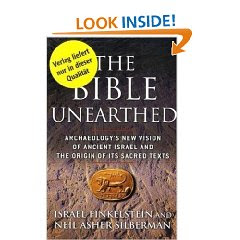 I just finished reading The Bible Unearthed: Archaeology's New Vision of Ancient Israel and the Origin of Its Sacred Texts by Israel Finkelstein and Neil Asher Silberman. This isn't a full review, just a few reflections on the book overall.

Provocative thesis. Engaging narrative that carries the reader along, convincingly arguing that provocative thesis must be correct. Strangely absent, evidence. Broad generalizations interspersed with standard textbook facts about the archaeology of Palestine propel the narrative to its controversial conclusion.

The book is at the same time thought-provoking and frustrating. The former because some of their interpretations make a lot of sense. The latter because of the lack of interaction with other interpretations and the general lack of hard data for the most controversial parts of their thesis.

As far as the thesis goes, it appears they want to locate most of the production of the Hebrew Scriptures - at least, the main historical narrative of Genesis-2 Kings - in the time of Josiah and connect the history and geography of the Exodus and Conquest to an idealistic retrojection of Josiah's hopes for an expanded territory and a purer Yahwistic cult back into the hoary past. The glory days of David and Solomon are no more real and just as legendary as King Arthur and Camelot.

The composition of the Hebrew Bible can then be understood in a quasi-messianic trajectory - some passages reflecting the hopes and dreams for the nation pinned on a special Davidic king (Josiah) and later passages responding to the theological crisis of failure (Josiah's death at the hands of Neco in 605). [This messianic pattern is well-established in millenarian movements. See Wise 1999 for background.]

I find elements of this thesis compelling. I think Josiah and the late 7th century was a pivotal time for the composition of the Hebrew Bible. In fact, it makes sense that a lot of literary activity was going on from 722-586 BCE as Judah saw the cultural destruction of Israel and absorbed many of her refugees. However, I think Finkelstein and Silberman have overplayed the evidence with their thesis. Unfortunately, it's hard to tell for sure unless one has a thorough command of the evidence apart from reading their book. The main weakness of the book is that they prefer to assert their conclusions rather than demonstrate their evidence. You have to take their word for it because they're not going to give you any help in retracing their steps with the evidence.

Further, I know that many of their conclusions based on archaeology are hotly contested, especially concerning the dating of possible 10th century structures and the identity of the early Israelites. But they don't acknowledge any doubt or alternative opinions in their narrative. Since they don't use footnotes or endnotes, they couldn't engage the scholarly literature there either. The only semblance that they are even aware of the scholarship on the subject is a detailed bibliography at the very end listed according to chapter. Ironically, the present alternative interpretations for some subjects in the back in a series of appendices, but their rebuttal of the evidence sometimes seems to undermine the argument they were trying to make in the rest of the book - about Josiah's program of expansion, for example.

In the main, I think it's well worth reading if only because it raises important questions about who wrote the Bible, when did they write it, and why? At every turn, the authors challenge the simplistic traditional answers to these questions. I'll end here with a quote from the last page (p. 318) about the issue of the Bible's historicity.

Yet the Bible's integrity and, in fact, its historicity, do not depend on dutiful historical "proof" of any of its particular events or personalities, such as the parting of the Red Sea, the trumpet blasts that toppled the walls of Jericho, or David's slaying of Goliath with a single shot of his sling. The power of the biblical saga stems from its being a compelling and coherent narrative expression of the timeless themes of a people's liberation, continuing resistance to oppression, and quest for social equality. It eloquently expresses the deeply rooted sense of shared origins, experiences, and destiny that every human community needs in order to survive.

Posted by Douglas Mangum at 8:44 PM