The section on Paleographical Studies in the Ancient Near East was packed with seven papers. Dennis Pardee and David Schloen finally presented the new Zincirli inscription around 3:15 p.m. They're calling it the Kuttamuwa stele since it's his mortuary chamber. For background and a partial translation, go here. My previous posts on the topic can be found here.

Schloen provided the archaeological background. The stele was found in Area 5 at Zincirli, a new area of excavation in the north lower town.  The stele was found in situ in a kitchen converted to a mortuary chamber.  The names on the stele are Luwian but the dialect is West Semitic. Zincirli is an important site for studying the interaction of Indo-European and Semitic cultures in the Iron Age.

Pardee gave the overview of the inscription itself. He expressed their intention to have the inscription published by the end of 2009. It has 13 lines, 202 signs, and 52 word-dividers. One of the most difficult issues for reading the text right now is the absence of criteria for distinguishing dalet and resh. He gave at least a half dozen examples where they can't be differentiated.

The question of the dialect of the inscription turned out to not be as simple as originally expected. It's not clearly Samalian because the plural noun ending is /n/ like Aramaic. But it's clearly closer to Samalian than Old Aramaic; despite the fact that the primary isogloss usually identifying Samalian is absent, there are 3 other features of Samalian present. Other features identifying the dialect as Aramaic are also lacking. The text has no examples of a definite article, for example. Pardee's preliminary conclusion on the dialect is that it falls between Samalian and Old Aramaic. It's an archaic dialect of Aramaic, not as archaic as Samalian but more archaic than Old Aramaic. He suggested the possibility of contemporaneous use of 2 closely related but distinct archaic dialects. One was used as the royal dialect seen in the Panamuwa inscription. The other is this new dialect seen in Kuttamuwa, possibly a linearly developed dialect used by lower strata of society. Later Zincirli inscriptions such as BR RKB show how the dominant Old Aramaic dialect eventually displaced the unique dialects in use at Zincirli.

Pardee also highlighted a few of the grammatical features of the text. He pointed out the relative pronoun zy and the demonstrative pronoun znn (the orthography with 2 nun's is unusual this early). He also drew attention to the verb qn apparently with the meaning "oversaw production, had made." He also drew attention to the uncertain word they are translating "chamber" - bsryr/d followed by 'lmy read together as "chamber of my eternity." He made a few other technical comments on the grammar and word choice in the stele. A number of lexical items are found apparently with meanings only previously attested for these roots in very late texts.

Lines 3-5 describe the offerings to be made to certain deities such as Hadad or Shamash, but there are three unknown deity names in the inscription.

The most striking statement of the stele is found in line 5: lnbšy.zy.bnṣb.zn. "to my soul which is in this stele." Is it evidence of cremation? Of the separation of the soul from the body? He was still living when he had it made according to the first sentence:

"I, Kuttamuwa, servant of Panamuwa, am the one who oversaw the production of this stele for myself while still living." [From University of Chicago's excerpt of the translation published here.]

Based on lines 10-11 (wyhrg.bnbšy "and the slaughter on my soul"), Pardee suggested that the slaughter could have been done on the stele itself as a way of performing the funerary cult proscribed by the stone. The relief on the stele shows Kuttamuwa sitting at a table with food and drink. 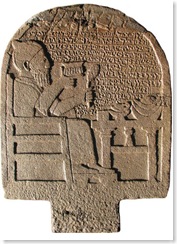 That was about all that Pardee had time for. I'm looking forward to the official publication of the stone, hopefully sooner rather than later.

While I was taking these notes on the presentation, Jim Getz was furiously copying down a transcription of the text (since it was on almost every slide).

The picture to the left was found at Archaeology.com.

Posted by Douglas Mangum at 6:38 AM