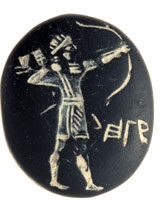 Wow...this really is biblical archaeology bonus week. Yet another find was announced today.
An archaeologist in Jerusalem found a seal from the First Temple era (seventh century BCE) with a Hebrew name on it. It's interesting and important for the Assyrian style artwork with a Hebrew name. We know from the biblical account in 2 Kings what a big role Assyria played in the history of Israel and Judah during the seventh century BCE.

The seal is quite unique since this is the first time that
a private seal has been discovered that bears a Hebrew name and is decorated in the Assyrian style. The seal attests to the strong Assyrian influence that existed in Jerusalem in the seventh century BCE. It is usually assumed that the owner of private seals were individuals who held government positions. We can suggest that the owner of the seal – Hagab, who chose to portray himself as a Hebrew archer depicted in the Assyrian style – served in a senior military role in Judah.

The possibility's been raised that the seal is a forgery planted at the site. See Robert Deutsch's comments and comparison pictures at Jim West's post (link below).