Written Hebrew & the Composition of the Bible

Too often our discussions of how and when the biblical books were composed fail to take into account the historical evidence for written language and text. That is, we rarely consider when the technology of writing was actually available for use composing the biblical texts. The tradition that Moses wrote the Pentateuch, for example, still has to explain how he could have written much of it in good 8th-7th century Judean Hebrew from his 13th century home in the wilderness. If Moses wrote the Pentateuch, what did he write the original in? Hebrew wasn’t an option then. Proto-Canaanite? Akkadian? Egyptian?

In recent years, a few books have come out dealing with this issue of scribal schools and scribal culture. The most well-known and influential to date have been David Carr’s Writing on the Tablet of the Heart (2005) and Karel van der Toorn’s Scribal Culture and the Making of the Hebrew Bible (2007). 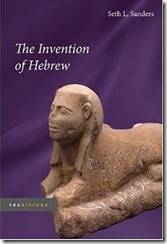 But the book that I think best deals with the question of how, why, and when the Israelites started writing Hebrew and how that impacts our theories of biblical composition is The Invention of Hebrew by Seth L. Sanders (2009). Perhaps the fact that Sanders provides theoretical and evidential support for some of what I’ve already long suspected about biblical Hebrew and the composition of the Hebrew Bible makes his argument land persuasively on me, but I will be very surprised if this book doesn’t have a major impact on future studies exploring the composition of particular biblical books. It is, in my opinion, a game-changer. Here is a representative quote:

By 700 B.C.E. local scripts like Hebrew have escaped the royal chancery; Israelites have used the old linear alphabet to create a literature. In the late Iron Age we find extended linear alphabetic texts in a spectrum of genres: letters from all walks of life, poetry, and ritual blessings. In the kingdoms of Israel and Judah the new writing had assumed a definitive status. Yet in the very territory and history Hebrew described, the literary silence from which it emerged had been forgotten.

The most successful product of this new writing, the Bible[,] reads as if written Hebrew had always existed, preserving no memory of its origins or what came before it. From the beginning, God had written the language that He, and Israel, spoke: Hebrew. Memory has been a major theme of recent Bible scholarship that tries to reconcile Near Eastern history with biblical literature. But the Bible was also a powerful tool for forgetting: the gap in memory between Late Bronze Age and late Iron Age culture erases a decisive moment in the history of writing in Israel, the point at which written Hebrew was invented. (p. 80)

Disclosure of Material Connection:  I have a material connection because I received a review copy (book, CD, software, etc.), or an item of nominal value that I can keep for consideration in preparing to write this content. This is not a full book review, but to be safe, I wanted to acknowledge the connection. Thanks to University of Illinois Press for sending along a copy of this book.

Posted by Douglas Mangum at 7:06 PM